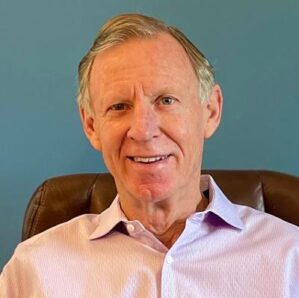 Jack Holton graduated from The University of Pennsylvania with a B.A, in History. While there he played varsity ice hockey and was President of his fraternity, Delta Phi/St. Elmo.

After graduation, Jack worked for 2 years as the Executive Director of the Delta Phi national fraternity, before returning to Philadelphia to attend Wharton. He received his MBA in Marketing in 1973.

Jack’s first job out of Wharton was with General Foods in Product Management. This was followed by a 4-year stint at Trans World Airlines where he rose to the Director level in both International and Leisure Marketing.

Having had enough of the Big Apple, Jack bought a house outside of Philadelphia and took a position as a Senior VP in a local advertising agency. After 3 years, he left that agency, along with a very talented creative director and founded Holton, Namiotka Jones. Over the years, the agency grew from 3 people to 33, handling many national and international clients, including Comcast, SAP, Right Management, Lee Hecht Harrison, Deloitte and Arthur Andersen, as well as several Philadelphia area hospitals, law firms and banks. In 2010, the agency name was changed to Holton Sentivan + Gury. Jack continues to run the agency virtually (without Sentivan and Gury) under the name, HSG Advertising.

Jack currently lives in Wyncote, PA with his wife Ashley, who is a residential construction project/design consultant. In addition to working on their new (110 year old) house, Jack still plays hockey, travelling as far as Santa Rosa, CA for the Snoopy’s Senior World Hockey Tournament and hopefully, the 2023 CARHA Hockey World Cup in British Columbia. Jack also plays tennis and paddle tennis at the Philadelphia Cricket and Penllyn Clubs.