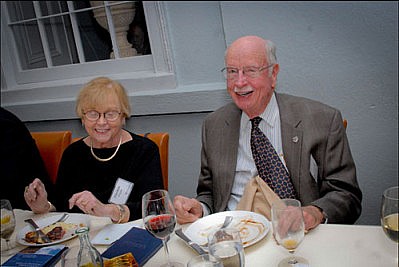 I met my wife of 55 years there. She was at an affair with a friend of mine when I first saw her. It was at the venerable Franklin Institute. A dinner under the view of Benjamin Franklin. That great old marble statue. It is of course, still there. And so are we. Betsy is very capable and has always known what she wants. DAR eligible, Westinghouse scholar and researcher with over thirty papers published. And five children and nine grandchildren.

Another high point was during an economics class, eco 101 I guess. I was an engineer and couldn’t spell economy let alone understand it. The professor was lecturing on our free economy and at a pause a young women stood. She was from Iran and wore the chador with head cover. She stated that in her country they didn’t believe the people knew what they wanted so the government planned for them. Nobody laughed but it was a somber moment. The professor told her it wasn’t that way here. Remember, 1956.

My marketing professor, Dr. Breyer I believe, lectured on the sales profession and stated that it was a service to bring things to people. An interesting point of view. And there was the memorable marketing course about surveys taught by the Dean. In my canvassing I visited a home in Overbrook. A lovely young woman answered the door. Behind her was her husband (a fair assumption in 1957), seated in an overstuffed chair with his back to me, drinking a beer. Totally immersed in the tv. He never even turned his head. A precursor to modern times.

We were invited to chaperone the local chapter of my fraternity. That was fun. Free drinks and don’t bother to be too scrutinizing. We were asked back so I guess we passed. We joined some undergraduate friends on skimmer day on the Schuylkill. I had a very old 5 hp Sears outboard and someone else supplied the boat. As I remember it almost literally sank.

I was deputy chairman for the school dance and provided the door prize. The chairman told me I had done a great job and he would recommend me for the chair next year. But he said that I probably wouldn’t get it as politics were involved. I didn’t. It was a preview of life in the mill.

Dr. Willis Winn was one of my professors. He loved rhetorical questions and for a while I tried to answer them So much for the unschooled engineer.

I had a professor of money and banking, a course that I loved. I asked the professor to be a reference for job hunting. He was actually shocked. Apparently nobody had ever taken a personal interest in him. But I got the highest money in the class.

I loved the beauty of the interest rate quad. Raise rates and the economy slows.

In retrospect, it was one of the best decisions of my life. I got a view of a whole different world and made some lasting friendships. And now, participation in the Emeritus group.