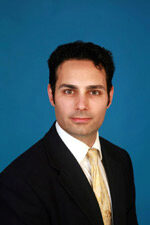 Michael J. Germano IV, W’01, wholeheartedly believes in the importance of giving back. “I was taught that, ‘To whom much is given, much is expected in return.’”

Michael has not only been a loyal annual giving donor over the past decade, he is also including the University of Pennsylvania and Wharton School in his estate plans, proving that you are never too young to utilize planned giving. He says, “I have included Penn and Wharton in my estate planning to leave a more substantial legacy, and to assist future students so that they may enjoy similar experiences to those with which I was blessed.”

It is easy for Michael to remember the moment that he realized Penn was for him—as a high school student, flipping through the pages of U.S. News & World Report and seeing the stellar rankings for Wharton. He knew that coming to Penn would open doors, both intellectually and professionally. “I am thankful for the opportunities the University provided me while a student and those that I have been afforded afterwards,” says Michael. “These opportunities are presented both because of the prestige of Penn and Wharton’s reputations and by the preparation and excellence that the University and School enabled me to achieve.”

Michael has watched his career grow, and currently serves as Vice President of Wealth Management for Citi Personal Wealth Management. Owing so much of his success to his time at the University, he plans to further expand his philanthropic support in the future so that others may feel the impact of a Penn education. Reflecting upon his own time as a student he says, “The experiences that I enjoyed at Penn and Wharton are ones that I cherish beyond words.”